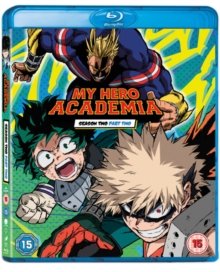 Episodes 13-25 of the second season of the Japanese anime based in a world where the majority of the population possess superpowers known as Quirks.

The episodes are: 'Time to Pick Some Names', 'Bizarre!

A Tale from the Past', 'Gear Up for Final Exams', 'Yaoyorozu: Rising', 'Stripping the Varnish', 'Katsuki Bakugo: Origin' and 'Encounter'.