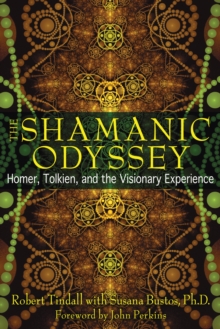 * Explores the shamanic use of healing songs, psychoactive plants and vision quests at the heart of the Odyssey and the fantasy works of J.

R. R. Tolkien* Examines odysseus's encounters with plant divinities, altered consciousness, animal shapeshifting and sacred topography - all concepts vital to shamanism* Reveals how the Odyssey emerged precisely at the rupture between modern and primal consciousnessIndigenous, shamanic ways of healing and prophecy are not foreign to the West.

The native way of viewing the world - that is, understanding our cosmos as living, sentient and interconnected - can be found hidden throughout Western literature, beginning with the very origin of the European literary tradition: Homer's Odyssey.

Weaving together the narrative traditions of the ancient Greeks and Celts, the mythopoetic work of J.

R. R. Tolkien and the voices of plant medicine healers in North and South America, the authors explore the use of healing songs, psychoactive plants and vision quests at the heart of the Odyssey, The Lord of the Rings trilogy and Tolkien's final novella, Smith of Wootton Major.

They show the deep affinities between the healing powers of ancient bardic song and the icaros of the shamans of the Amazon rain forest, how Odysseus' battle with Circe - wielder of narcotic plants and Mistress of Animals - follows the traditional method of negotiating with a plant ally and how Odysseus' journey to the land of the dead signifies the universal practice of the vision quest.

Emerging precisely at the rupture between modern and primal consciousness, Homer's work represents a window into the lost native mind of the Western world.

In this way, the Odyssey, as well as Tolkien's work, can be seen as an awakening and healing song to return us to our native minds and bring our disconnected souls back into harmony with the living cosmos.