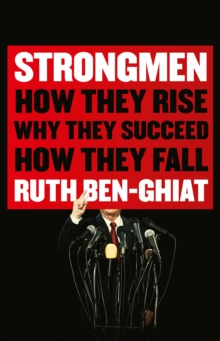 Strongmen : How They Rise, Why They Succeed, How They Fall Paperback / softback

by Ruth (Professor of Italian and History) Ben-Ghiat

Ours is the age of the strongman. Russia, India, Turkey and America are ruled by men who, as they have risen to the top, have reshaped their countries around them, creating cults of personality which earn the loyalty of millions. And as they do so, they draw on a playbook of behaviour established by figures such as Benito Mussolini, Muammar Gaddafi and Adolf Hitler.

Here, political historian Ruth Ben-Ghiat draws on analysis of everything from gender and sexuality to diplomatic strategy to explain who these political figures are - and how they manipulate our own history, fears and desires in search of power at any cost.