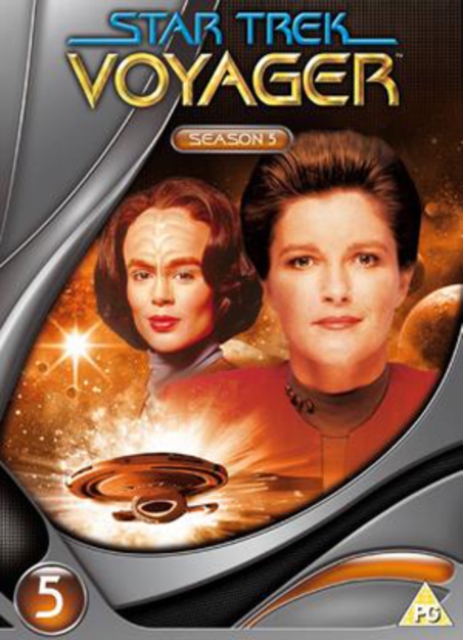 All 26 episodes from Season 5 of the third 'Star Trek' spin-off series.

In 'Night', Voyager is attacked by alians possessing superior weaponry while traversing a dark region of space. 'Drone' sees the crew joined by a new member after a transporter malfunction results in the creation of a seemingly obedient Borg Drone.

In 'Extreme Risk', an alien vessel's hostile attempt to steal one of Voyager's probes prompts Janeway to build a new shuttle. 'In the Flesh' sees the discovery by the crew of an exact replica of Starfleet academy on an alien world.

In 'Once Upon a Time', Neelix has to look after engineer's daughter Naomi when the Delta Flyer crashes. 'Timeless' sees the course of history altered when two criminals steal the Delta Flyer and some Borg technology.

In 'Infinite Regress', Seven of Nine becomes the victim of an assimilation attempt when Voyager picks up some Borg wreckage in space. 'Nothing Human' sees B'Elanna Torres' life under threat when an injured alien attaches itself to her body.

In 'Thirty Days', Voyager makes contact with an underwater race whose world is evaporating. 'Counterpoint' sees the crew attempting to conceal their cargo of telepathic refugees from the Devore.

In 'Latent Image', the Doctor discovers that someone has been tampering with his memory, and becomes convinced that he is the victim of a sinister conspiracy. 'Bride of Chaotica!' sees Janeway forced to assume the identity of Arachnia, Queen of the Spiders, when some Fifth Dimension aliens mistake Paris' holographic novel for reality.

In 'Gravity', Tom Paris and Tuvok are trapped on a barren world for months after falling through a sinkhole in space. 'Bliss' sees the Voyager crew on the verge of entering a wormhole which will return them home when Seven of Nine decides to sabotage the attempt.

In 'The Fight', the crew of Voyager are forced to rely on the mental clarity of Chakotay when they become trapped in space. 'Think Tank' sees Janeway offered assistance by a shipful of brilliant alien thinkers during a conflict with Hazari bounty hunters.

In 'Juggernaut', Torres leads an away team on board a Malon freighter that could explode at any moment, and learns of a mythical creature which is believed to inhabit the ship. 'Someone to Watch Over Me' sees the Doctor's attempts to teach Seven of Nine the basics of human social intercourse producing some unexpected results. '11.59' provides a flashback to the year 2000, in which Captain Janeway's ancestor, bookstore owner Henry Janeway, is the one obstacle to the building of a historic Millennium Gate.

In 'Relativity', Seven of Nine is called upon by the Federation timeline guardians to travel back in time and prevent a pre-launch sabotage attempt on the U.S.S.

Voyager. In 'Warhead', Harry Kim is given the opportunity to command the ship, and takes on board a sentient alien machine transmitting a distress call.

It soon transpires that this act has placed the entire crew in great danger.

Finally, 'Equinox Part 1' sees Voyager coming to the aid of another Starfleet vessel lost in the Delta Quadrant when it seems to be under attack from an alien vessel.