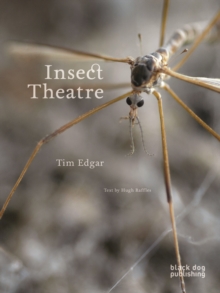 Insect Theatre is the result of photographer and lecturer Tim Edgar's three-year project examining the insect life in his home through a close-up lens.

With macro photography Edgar is able to capture the fragile nature of the insects and the conflict in the chaotic web in which they reside, providing a uniquely personal and fascinating view of the creatures sharing his domestic space and the 'performances' they play out. Anthropologist and insect expert Hugh Raffles annotates Edgar's project, discussing the life and death situations in the cobweb and the chaos of the domestic insect world.

With four short texts Raffles makes Edgar's project easily navigable, pairing the close observation of natural science with a sense of intrigue and wonder whilst observing the natural world. An essential book for those interested in insect studies, natural science and art photography, Insect Theatre provides an eyeopening commentary on the spectacle of the everyday and the insects that we live with.