Vicente Fox, the former president of Mexico, issues both a denunciation of the current state of American politics and a call to unity and resistance in the face of rising ethnocentric and anti-democratic sentiments.

He knows where a Trump presidency can lead-and it is nowhere good.

Let's Move On is a political manifesto written in Fox's trademark, no-nonsense style where he both denounces Trump's malignant anti-intellectualism and inspires people to rise up and resist. "Fox knows America. He gets it. He digs it, its big dreams and weird nightmares. He lays down the chords in the key of the American Dream like a master." -The Washington Post 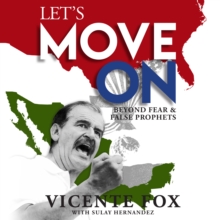