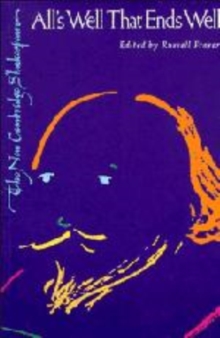 An international team of scholars offers: * modernised, easily accessible texts * ample but unobtrusive academic guidance * attention to the theatrical qualities of each play and its stage history * informative illustrations, including reconstructions of early performances This play has attracted unprecedented interest in recent times.

Professor Fraser takes account of its history, in which neglect and unpopularity have been important features, and discusses such reactions and the reasons for them.

He argues for a play which is a powerful and often disconcerting blend of darkness and comedy, faults and virtues, failing and forgiveness.

Beneath the fluctuating imagery there is a constant sexual undercurrent which compels unusual critical attention.