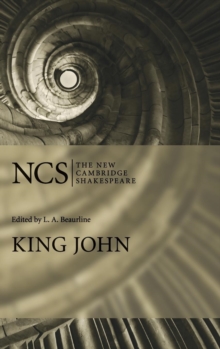 Edited by L. A. (University of Virginia) Beaurline

Edited and introduced by L. A. Beaurline, the New Cambridge Shakespeare edition of King John offers the most complete account to date of the play's stage history, with accompanying illustrations to demonstrate its dramatic potential.

Although King John fell out of fashion by the end of the nineteenth century, Beaurline shows how its political importance, rich and varied language, and skilful design suggest that it should occupy a prominent position among Shakespeare's historical tragedies.

In the Appendix, Beaurline surveys the arguments about the dating of the play and the anonymous Troublesome Reign of King John, and presents new evidence to support the view that Shakespeare's play was written first.