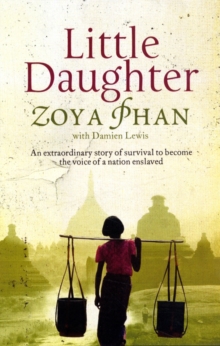 Little Daughter : A Memoir of Survival in Burma and the West Paperback / softback

Zoya Phan was born in the remote jungles of Burma, to the Karen ethnic group.

For decades the Karen have been under attack from Burma's military junta; Zoya's mother was a guerrilla soldier, her father a freedom activist.

She lived in a bamboo hut on stilts by the Moei River; she hunted for edible fungi with her much-loved adopted brother, Say Say.

Many Karen are Christian or Buddhist, but Zoya's parents were animist, venerating the spirits of forest, river and moon.

Her early years were blissfully removed from the war.

At the age of fourteen, however, Zoya's childhood was shattered as the Burmese army attacked.

With their house in flames, Zoya and her family fled.

So began two terrible years of running from guns, as Zoya joined thousands of refugees hiding in the jungle.

Her family scattered, Zoya sought sanctuary across the border in a Thai refugee camp.

Conditions in the camp were difficult, and Zoya now had to care for her ailing mother.

Zoya, a gifted pupil, was eventually able to escape, first to Bangkok and then, with her enemies still pursuing her, in 2004 she fled to the UK and claimed asylum.

The following year, at a 'free Burma' march, she was plucked from the crowd to appear on the BBC, the first of countless interviews with the world's media.

She became the face of a nation enslaved, rubbing shoulders with presidents and film stars.

By turns uplifting, tragic and entirely gripping, this is the extraordinary true story of the girl from the jungle who became an icon of a suffering land.